A lot of very good things has been said already and I will try to build on that._

I think, as we said before this morning, security and freedom really intertwine because you need the security to communicate to do it freely. What is important in this sense is that we have to try to raise the costs for surveillance. Surveillance is too cheap on the internet at this point. So we should push the technologies that are safe and secure by default. I think that is very important in the cause of cyber-dissidents and bloggers, because that will move them again from the edges of the field to the whole playing field of encrypted communications.

_We here in Europe here have to look to citizens as citizens, just as we expect from (for example) the Democratic Peoples Republic of China and not to look at citizens as potential suspects.

Another point is that we as a company believe in corporate responsibility. That means that the technology we use is our responsibility. That is more then just the social responsibility for what you produce, but also for the things you put on the market and the stuff you sell. It is important that the industries commit to a code of conduct which is also supported by governments so that these code of conducts might lead to legislation. If we do it this way, and involve corporations, the stakeholders in this legislation, the corporations that are most responsible will have the more benefits from this new laws and it will push the slower companies to take action. 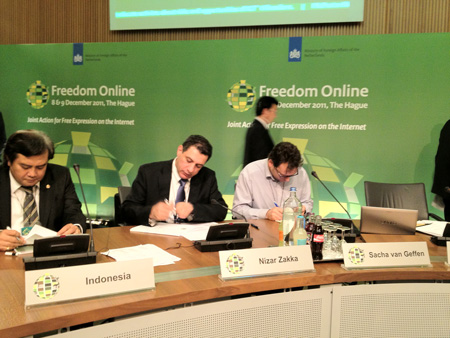